I’ve been travelling to Egypt since I was sixteen.  I’ve witnessed it change through the years.  It’s wonderful to see the conservation, preservation and, in some cases, restoration of Egypt’s ancient monuments.

An example is Luxor Temple, set right in the heart of modern-day Luxor on the Corniche, the boulevard that borders the east bank of the Nile, with hotels strewn along its length.

Luxor Temple dates from circa 1400BC, a New Kingdom temple built under pharaohs such as Amenhotep III and Tutankhamun of the 18th Dynasty, and Ramses II of the 19th Dynasty. Unlike the other temples in Thebes, Luxor temple is not dedicated to a cult god or a deified version of the pharaoh in death. Instead, Luxor temple is dedicated to the rejuvenation of kingship.  It may have been where many of the pharaohs of Egypt were crowned. 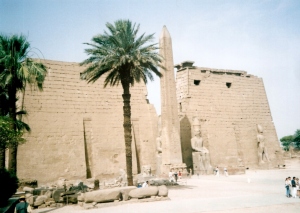 On my first few trips to Egypt the immense pylon (gateway / entranceway) to the massive temple boasted two enormous seated colossi of Ramses II and a single obelisk.  This was originally one of a pair.  Its twin stands in Paris at Le Place de la Concorde.

There used to be a shattered colossus of a once-standing Ramses II lying on the western side of the temple. And also a famous head-and-shoulders bust of this same king, set on a plinth on the eastern side of the entrance. 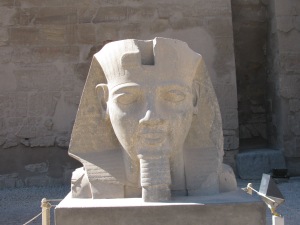 I imagine tourists the world over who’ve visited the temple must have their own version of this photograph taken of me back in 2004.

So it was rather wonderful to visit in late 2018 (after a gap of almost 5 years) and see the incredible changes that had taken place. 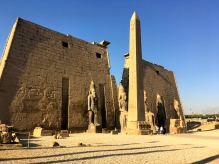 Here is the pylon of Luxor Temple as it looks now.

Two standing statues have been reconstructed, one on either side of the seated colossus.

A fabulous feat of modern engineering to bring this fallen giant back from ruin. 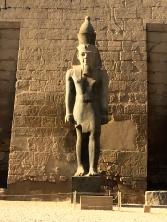 And imagine my surprise when I switched on the TV one Sunday evening a couple of weeks ago and saw a Channel 4 documentary which featured the restoration work to raise the fallen statue.  Here is Mahmoud Farouk, who leads the restoration team based in Luxor on photos I took of the television while the documentary was playing.  I even managed a tiny bit of video!

Now, I’m lucky enough to have met Mahmoud.  When I was last in Egypt over Christmas and New Year 2019-20, my guide introduced me to him, and I was very privileged to have him show me around a part of Karnak Temple usually closed to the public.  That’s one of the privileges of being able to tell people I write books set in Egypt !  Here we are together at Karnak.

It really is wonderful to see the work that he and his team are doing to clean and preserve the ancient monuments.

Fiona Deal, Author of Meredith Pink’s Adventures in Egypt, all available on Amazon. To join Merry on her adventures please click on each picture for the link.