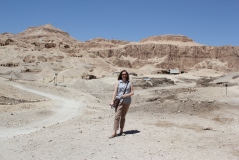 One of the highlights of my trip to Luxor was the chance to visit some of the little-known Theban Tombs.  They riddle the Theban Hills like a mountainous Swiss cheese.  According to my guide book there are thousands of them, although only a handful are open to the public with a ticket purchased from the ticket booth near the Colossi of Memnon.  I visited the three tombs of El-Khokha.

The tomb of Dhuti is unusual for containing seated statues,presumably images of the deceased tomb-owner himself, gazing over his grave goods.

Nefersekhuru and Neferrenpet were both Scribes of the Treasury in the Estate of Amun-Ra during the second half of the reign of Ramses II,

and would presumably have known each other.  It’s tempting to see thrm trying to out-do each other with their tombs.  Both bear their original paintings, the colours remarkably preserved considering the passage of some three thousand years.  Nefersekhuru’s tomb has a beautifully painted geometrically patterned ceiling, shown here in the photograph. 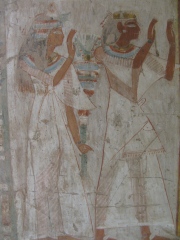 The Theban tombs show us a slice of real life that’s not so easy to glimpse in the royal tombs, which are laden with religious iconography.  These are the houses of eternity that you or I may have chosen for ourselves, had we happened to live in dynastic Egypt and boast a reasonably good job.  Here’s just a selection of the scenes.  The guard on duty was more than happy for me to take photographs in return for a little baksheesh.  I switched off the flash of course.

Do visit if you ever get the chance.  These wonderful little sepulchres are not to be missed.